Legion of Ever Present Glory, part 10

The inexorable push of progress (i.e. slow) on the First Legion of Ever Present Glory continues... 4 more minis completed: 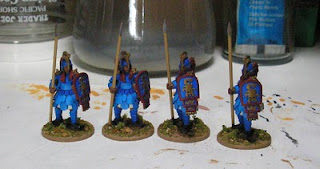 A poor, poor pic - my apologies. These bring up the total of completed minis to 16 - 14 more to go, then on to Sérqu! Here is the WIP pile: 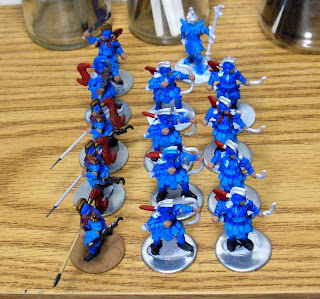 Still a lot of detail yet, although the 3 spears on the left are reasonably close to completion.

The following is what I had previously posted about rules...

I think that I have finally made a decision on the rules to use for mass battles. After some thought and a few practice games - using just some old metal bases as units - I have decided to use Fantasy Rules! by Chipco. I think the benefits of the quick play and unique army control system, the Morale Clock, outweigh the non-linear basing. I will do some tinkering to FR!, as I think the missile ranges are too long and some of the bases, for ambuscadiers (skirmishers) especially, will be rectangles instead of squares just for appearance's sake.

I will post my rules mods here as I go.

I still have not really made a decision as I am now plowing through a series of AWI (American War of Independence) sets to see if they are compatible. The lack of cavalry in both the AWI (and even War of 1812) and the Half-Continent is a surprising commonality, as is the variety of units possible. So, I continue searching - it will end soon as I am almost ready to base up troops!

Many thanks for The Baron for his suggestions!
Posted by El Grego at 11:11 No comments:

The first package of 15mm miniatures has arrived for the H-C project!

This first order, from Minifigs, was really just a sampler to figure out which minis would work for the plan. I ordered one pack of 24 minis each of French, Dutch, and Russian troops.

Here are the pics: 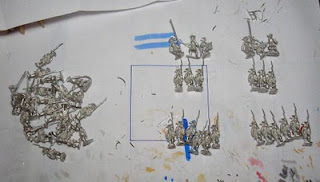 The Dutch unit is in groups on the right, with the Russians en masse on the left. I was very surprised to find that the miniatures for the Dutch and Russian units are exactly the same - I do hope that it is intentional and the uniforms of the time for each nation were similar. But, since they are the same I now have two usable units for the collection. The French are a bit different which I will explain a bit later.

And, the first unit glued up to some nails and ready for painting - almost: 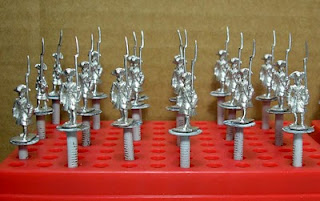 A close-up. I did not realize until I was nearly finished with cleaning and gluing that the troops will need a slight modification. If you look closely, there is a strap for the ammunition pouch running across the mini from the left shoulder. But, there is no baldric running across from the right shoulder. So, I am going to try and add a baldric to each mini using Green Stuff epoxy... should be exciting! 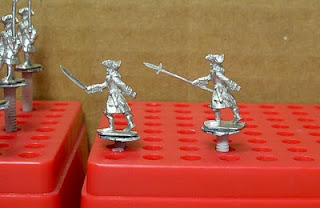 Here is a close-up of the two officers. Originally, each mini was the same as the one on the right. But, I took a little time to change that. I clipped off the tip of the spontoon and flattened the shaft. With some carving and filing I think I have a reasonable sword for the commander. 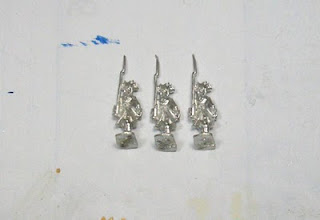 This is a pic of some of the French troops. There minis are different from the other two, with the troops carrying their musket on the right, instead of the left. Not a huge difference but I really want to have the units appear similar, at least for now. Meanwhile, the French unit will be pressed into service as the test models for my attempts with green stuff, to make the baldrics.

Now, this is some actual progress! I still need several different pieces of the puzzle - Green stuff and some more paints (on order); bases; and of course many more minis!
Posted by El Grego at 19:11 6 comments:

Settling in on a set of rules for this project seems to be a real problem for me. Just when I thought I had it sorted out with Fantasy Rules!, little pieces of the puzzle appear to not fit as well as I had hoped. As I continue to search, I am realizing that there is an important underlying factor. Units in the Half-Continent seem to be based primarily on our own 18th century history, which was a time of linear formations in combat. Thus, the main appearance of units in my version of H-C battles should be linear. Now, scale limitations preclude an accurate depiction of units - they are much much more wide than deep - one should have a semblance of a linear formation.

Fantasy Rules! is primarily a 'fantasy' game, partially based on early medieval formations in my estimation, where units were deeper than the lines of the 18th century. Bases for the units in Fantasy Rules! are squares, 1 base for each unit. Here are some close approximations: 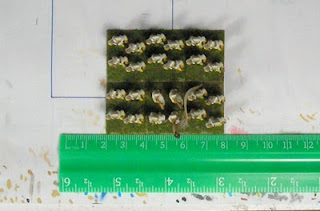 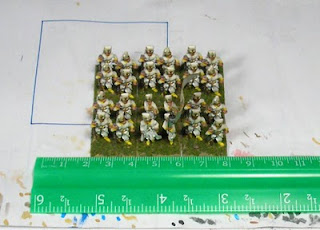 These are some Ottoman Turk Janissaries - my first completed 15mm unit (more pics here) - waiting patiently on my desk. The width shown, 60mm, is what I had been planning to use for my FR! units, although I would have only used 3 ranks instead of the 4 shown. The unit is not very linear in appearance.

Now, compare the above to this: 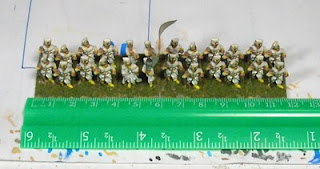 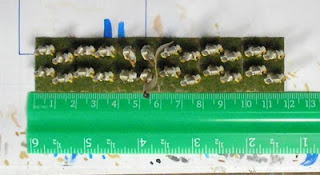 Twice as wide and half as deep - much more linear in appearance. I think that this would be more appealing on the tabletop than the squares of FR!. Please do not get me wrong - FR! is a fine set of rules, very flexible in their composition and easy to use, but a bit too deep for this project. I do intend to imitate many ideas from them to supply the next rules set with special rules, especially for the characters that might appear in a Half-Continent battle
Posted by El Grego at 19:01 6 comments: