One of the things that I like about blogging is the ability to use a blog as a concise storage point for data about projects.  I have notebooks and digital link collections squirreled away about genres, but a blog is useful for refining thoughts and placing them in one easy to access place.

So, what projects are bouncing around here?

First, I am slowly working on a Greek and Persian project.  This will be in 28mm, and the most likely rule set for this will be DBA3.0.  Right now, this project is on hold, as I would like to do this all in plastic figures, and although Victrix does have plans to create plastic Persians those plans are 3 or so years into the future.  I will continue to pick up Victrix Greeks - I have some hoplites already - especially if I can find them at a discount.

Second is another slowly forming project - Romans.  A pair of packs of the new Victrix Early Imperial Roman legionnaires have been purchased, but I need more, and of course some opponents would be nice.  Victrix comes through again with their new Gauls, which I will use as Britons.  It is slightly possible that I will extend this project with Germans.  DBA3.0 is the likely ruleset for this also.

Next would be my '1066' project.  I have made a small amount of progress with this also - Footsore Vikings have been purchased and the first unit of Bondi is on the painting table.  I have yet to determine a specific ruleset for this one; I intend to try several once this is gameable.

Following closely on the heels of the '1066' project is my Scots project.  This is based around the original offerings from Claymore Castings for the Battle of Otterburn in 1388.  I do not intend to closely follow this battle, but a close approximation is planned.  I also want to include a small French force, as one landed in Scotland in 1384 (?) and fought in some minor skirmishes before leaving.

My Meso-american project is in a state of flux at the moment.  With the release of the new line of Aztecs in 10mm from Pendraken, I have stopped active work on the 28mm project to let ideas simmer in the back of my mind.  The 10mm miniatures are great - I have some sample packs - but there would be quite a bit of work involved in getting this project running as there are no opponents for the Aztecs in 10mm.  While it is quite possible to proxy or modify figures for Tlaxcallan and/or Huaxtec armies, I am not sure about going that far, yet.

My next project, chronologically, is a big surprise even for me.  As I began to research a naval project about the War of 1812, I realized that the naval actions, especially on the Great Lakes, were closely linked to the land battles.  One thing led to another, and now I have a book or three and some samples of figures in 28mm for US troops.  Before I continue, I need to lock down the set of rules.  I have a copy of Sharp Practice from TooFatLardies, but I am looking for a set of rules for slightly larger actions.

For the 20th century, there are two projects - WW1 and SCW.  I have some 15mm Russian miniatures for WW1, but the project just has not yet coalesced into something more solid.  SCW in 1/72 scale, on the other hand, has received attention here, but progress has stopped for now.  While coming up with a list of figures I needed to get my lists for Chain of Command complete, I realized that 15mm would be a fair amount cheaper.  (The total $ figure to get the remainder of the 1/72 figures needed would finance a complete re-do of the project in 15mm...)

And there are the non-historical projects.  Recently, I bought into the Kickstarters from Steve Jackson Games for the venerable miniatures game, OGRE.  There is also the Infinity project, which I will work on in the future although my sons seem to have gone back to Warmachine for the time being.  My 'Monster Blood Tattoo' project is still waiting for attention, not forgotten however.  And the Tékumel fantasy project is waiting patiently in the shadows...

LOTS of projects!  I am resigning myself to slow incremental progress over a broad range of projects, as opposed to banging out one at a time on a narrow front.  No gaming schwerpunkt here!! 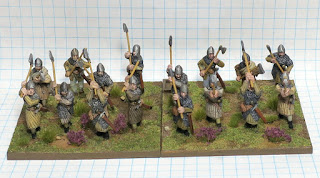 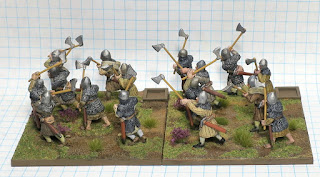 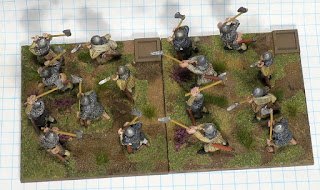 The tufts have landed!  The tufts are Gamer's Grass brand; I believe that I purchased these from GC Mini.


After the glue dries - I secured the tufts to the bases with Matt Medium - the last step can be completed and that is to clean up the base edges.  Then, finally, they will be done.

With this post, I bring to you a project that was originally featured on a separate blog that was disbanded long ago.  The posts and pics from the discarded blog are here now, so one could look at previous work on these miniatures by clicking on one of the labels listed on the right or at the end of this post.

Slow, slow progress... the first two stands of Islemen for my medieval project: 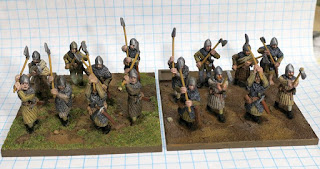 These miniatures were originally produced by Claymore Castings, but are now available from Antediluvian Miniatures.  The bases are not quite complete, as I have some tufts waiting to be placed.  From looking at the pics, I can see that I need to work on my skin colors a bit!