Although it is more to support my Half Continent project at Threwdish Ways, I have ordered a small quantity of bases for Impetus from Litko. These are a mix of 3mm thickness plywood: 80mm x 20mm, 80mm x 30mm, 80mm x 40mm, and 80mm x 60mm. I did order enough to have just a little something to start my project here!

But, what is my project for this blog? I am going to start with Classical Greek topics, both the wars versus the Persians and the struggles between the Greeks themselves. This is going to be a slow-burning project, as I am still amassing research materials. I have a few books, and some other rules - mostly for inspiration. Obviously, the minis will be 15mm but what manufacturers? That remains to be seen...
Posted by El Grego at 11:26 1 comment:

Here is a pic of the basic color scheme I intend to use for the Boschenberg units: 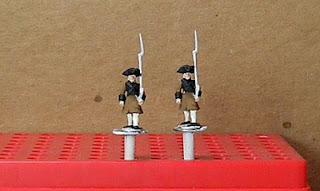 The belts, sash, vest, baldric, and musket are not done yet, but this is the general theme. I have discovered one useful piece of info - sometimes it is better to prime in black (these were primed with a light grey primer - Reaper Master Series Brush-on Primer) !

I have decided that the first battalion to be painted up will be from Boschenberg, capital city of the realm Hergoatenbosch. Not surprisingly, this is the home of the main character in the Monster Blood Tattoo series, Rossamünd. Rossamünd is not in the employ of Boschenberg, so he will not be appearing in this unit. Will he be on the battlefield someday - hmmm, probably, when I can find an appropriate mini in 15mm!

The mottle of Boschenberg is brown and black - (mostly) brown platoon coat with black sash, cuffs, and vest.

I will have pics once I have at least three colors on the minis!
Posted by El Grego at 12:30 2 comments:

On the left I have added a series of links for Impetus-related information, including free downloads.
Posted by El Grego at 20:17 No comments:

Just noticed that the visit count passed 16000 today... I would say Wow but this blog has been around since 2005 and that is not such an impressive number, even when you consider that I did not load up a counter until May 2007.

A sincere Thank You to all of the people (except those few spammers!) that stop by one of my corners of the 'Net!

After quite a delay, I have taken another small step towards getting my first unit done.

One of the important parts of a soldier's harness (uniform) in the Half Continent is the baldric, as this is an important means of identification for the soldier. The baldric is tinted in the colors of his realm's mottle - a specific combination of colors and patterns unique to each realm. The baldric on most Half Continent troops runs from the right shoulder down to the left side of the waist. In my limited searches, I did not find any 15mm (or even 28mm) minis with such a baldric. So, I need to make my own.

Here the troops, the first battalion on the left and parts of the second battalion on the right, with their new baldrics. I made them with blue/green two-part epoxy - the same material that is used to sculpt most minis. I had never used the material before but it is not hard to use at all. It is a bit sticky but I found that if I left it cure somewhat it is much easier to use. Using just a pea-sized bit of epoxy, I rolled it out between a small piece of waxed paper to flatten it, then waited a few minutes for it to start to cure. Then, I sliced strips off the 'pancake' of green stuff and stuck it to the mini. Easy! 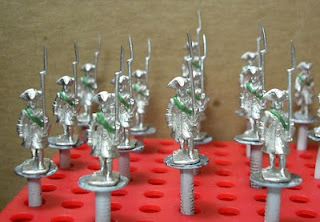 If you look closely, you will see that over time the baldric is more defined. The minis on the left of the pic were first, and are not as good as the later troops. 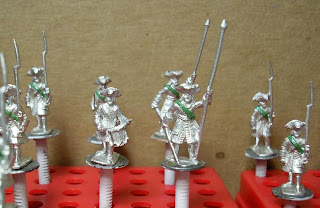 The drummer did not need a new baldric, as the strap for his drum is just perfect. Now, I need to let the epoxy cure for a day or so, then the real fun begins - painting! But, I will need to decide what realm will have the honor of the first unit...
Posted by El Grego at 19:20 2 comments:

What is going on here at the El Grego table? Well, I am trying to both narrow my focus and expand my coverage, if that makes any sense. By narrowing my focus, I am trying to only work on a limited set of projects (yeah right) and get something done. To help with that, I have narrowed down my project list a bit, I think, and mostly by scale:

28mm - only for skirmishes and sticking with fantasy. Right now focusing on Tékumel minis, but if I ever find those shields I will finish off that group of orcs...

So, here is the 'expand my coverage' bit:

Blog #1 - the one you are reading right now, The Pewter-Pixel Wars. This blog will be focused on 28mm skirmish games and minis.

Blog #3 - the oddball blog, Threwdish Ways. This one is focused on the Half Continent, created by DM Cornish as set out in the Monster Blood Tattoo book series. There will be a mix of everything here, from skirmishes in 28mm to 15mm mass battles to naval games. This is my Imagi-nations blog!

Blog #4 - my mass battles blog, Battles in 15mm. The newest blog in the line-up, featuring the rules set Impetus. Eventually, this will have historical and fantasy armies and battles. If you are looking for more Impetus information, please visit/bookmark/follow this blog.


There you go. Hopefully you will find something interesting on one of them. It might not make much sense, but they do say - 'Dilution is the solution...'

Just to start off, here is a link to one of my other blogs with posts about Impetus - hopefully I will remember to expand upon it here. I did not get very far with using 28mm minis for this project; 15mm will be a better fit for mass battles I think.
Posted by El Grego at 19:20 No comments:

This blog is going to be my repository of information and pics on my miniatures gaming activities in 15mm. It is intended that the main focus will be mass-battle games, not skirmishes which are covered more thoroughly on my main blog - Pewter-Pixel Wars. Historical and fantasy genres will be included.

The rules set that is leading the pack right now is Impetus, authored by Lorenzo Sartori and modified by others along the way.
Posted by El Grego at 11:58 No comments:

Legion of Ever Present Glory, part 11

Just a brief bit of frustration to share this time: 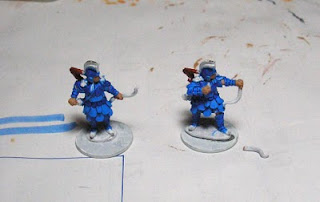 The bows on Eureka's Ever Present Glory miniatures are a little bit fragile, as shown on the archer on the right. That is not the first bow I have broken in this group, but usually I catch the fracture before the bow comes off completely and fix it with super-glue. This one will need to be pinned for a more permanent fix...