Just a work in progress shot: 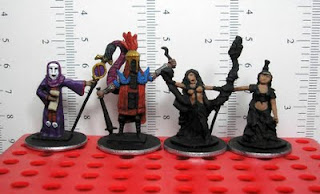 The priest of Hrü'ü (far left) is nearly done - the plume needs touch-up and the mask (my third try) needs something more.  The priest of Vimúhla (second from left) needs more red!  I think I went a little overboard with the blue on the shoulders... but he is not nearly done yet.  The reds will take some work to look good.  The priestesses of Dlamélish (second from right) and Avánthe (far right) are just starting to get some paint and are a long way from being completed.


And, I have been added to the Tabletop Gaming News TGN Blog Network!  Thank you Zac, and Hello to the TGN network!

No gaming table should be without trees.  And there is a multitude of good-looking pre-made trees out there of many sizes.  But, being short of funds and always desiring a unique look to my projects, I am going to try and build my own. 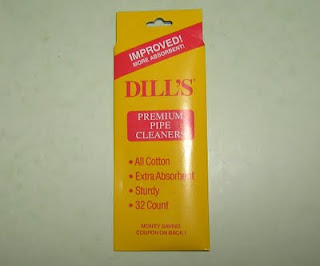 This is the base material for the trunks/branches.  These are cotton pipecleaners, not the nylon ones from the craft store.  I bought these many moons ago, and they have been sitting patiently in a box for just this moment. 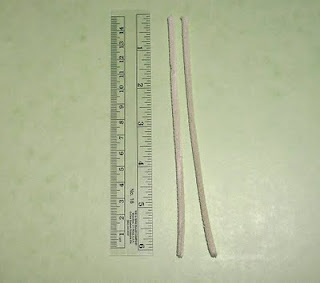 Contents of the package.  There are 32 of them in each package. 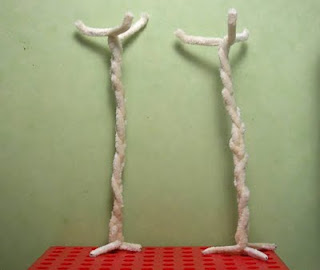 Construction of the trunk is simple - just twist three of the pipecleaners together, leaving enough at each end for roots or branches. 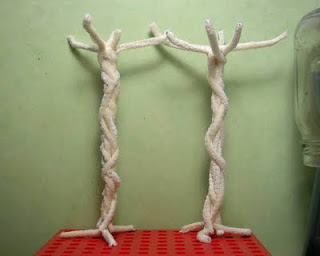 These are made with six pipecleaners, mostly to give more branches and to make the trunk bigger.  I wish I had included the scale for the pics - maybe next time. 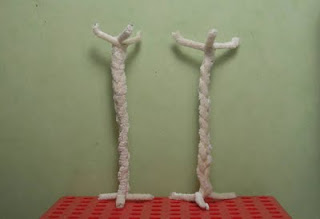 I cut approximately 1 inch off each of these pipecleaners prior to twisting to make some slightly shorter trees.


The next step is to coat the trunks and branches with some modeling paste to stiffen the structure a bit and cover up the obvious nature of the construction.

Dusting off this blog!

Despite my affinity for 28mm, I am reconsidering 15mm mostly due to cost and space.  Money is tight at the moment as is space for games.  Also, 15mm looks better in a mass-battle aspect; 28mm nails it for skirmishes.

Along with this, the rest of the project is up for reconsideration also.  Greeks/Persians are still a possibility, but I am also thinking about Successors, Romans/Gauls/Pontics, Late Romans, and 13th century medieval.  Rules are another aspect up in the air; there are many possibilities and I can not rule out the chance that I will want to paint up some fantasy armies as well!

So, hopefully much to blog about.
Posted by El Grego at 08:18 No comments:

After some thought and research, I am dusting off this project and giving it another try.  A recent and sudden cash crunch here in my household is also making me go back to previously purchased minis instead of splashing out for more!
Of course, this project re-start could not be free of some minor drama... And the dilemma of the day involves rigging.  There are two styles - sails and masts up, or sails and masts removed.  For a great example of fully rigged ancient ships, take a look at Hetairoi's gallery.  Beautiful stuff!  And on the opposite tack, some great examples of un-rigged ancient ships can be found at one of the many Roman Seas galleries.
I am going with the un-rigged method, for a couple of reasons.  First, it will be quicker to get the ships fitted out for a game.  Second, from a historical viewpoint, oared warships, at least those of the Greeks and Romans, et al, went into combat with their masts and sails removed unless in extreme situations.  Third, the lack of masts might make the decks more visible, and I have some ideas for reconstructing the deckwork and adding shipboard artillery.
Of course, I decided this AFTER drilling holes for masts through the deck of my first warship!
.
Posted by El Grego at 08:27 2 comments: 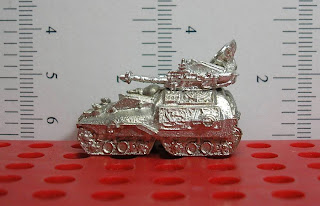 
And, a top-down pic of the Terran light war machine, destroyer, and APC: 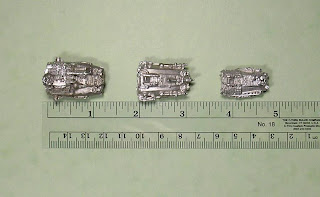 Eric Hotz recently put on a great-looking MAATAC scenario for the Trumpeters club - wish I could have been there!
Posted by El Grego at 07:18 4 comments: 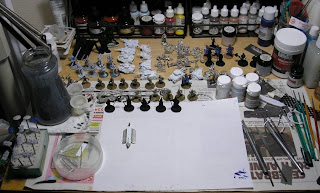 Some interesting if slow-moving projects here - a warband of Hlutrgú almost finished; a few extra Ever Present Glory troopers awaiting matte finishing; priests and priestesses of Tékumel with black undercoat; some high command minis of various Tékumel empires awaiting attention (thanks again Jeff!); the first few Sérqu minis; assorted generic fantasy minis; some of those MAATAC tanks; and assorted tools of the trade.  Oh yes, and an oared warship, whose project has been reconsidered and a tiny bit of progress accomplished!
.
Posted by El Grego at 09:30 No comments:

I am slowly progressing through the collection; here is one more installment: 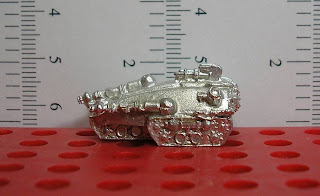 This is the Terran Thunder class destroyer.  There are three beam weapons, and two of the Terran-standard small turrets, used I believe for close-in protection from infantry and missiles.
Posted by El Grego at 08:55 1 comment:

I am slowly progressing through what is left of my MAATAC collection, and here is another pic: 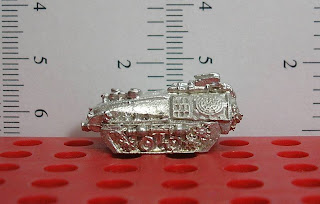 This is the Terran Lightning class personnel carrier.  The mini is a one-piece casting.  There are three light beam weapons (somewhat visible in this view) mounted on top.

To the best I can ascertain, my old Superior MAATAC minis are gone, along with my old copy of the rules.  All that is left is what I am slowly posting here.  These are all cast by Monday Knight.  I do have a good-sized Terran force, but only a small handful of Carnivoran and even less Entomolian minis, and no Aquarian or Avarian minis.  This is not a major problem though (although the loss of the old, painted minis is not good) as this is intended to be a slow-burning project.  The terrain especially will be different from anything I have tried previously - never have tried a snow environment!
Posted by El Grego at 09:27 No comments: