A couple of nice, new blogs relating to Renaissance-era gaming:

Info and pics of 25mm Renaissance miniatures, including photo comparisons.

An ongoing Renaissance campaign. Great pics and free downloads of the campaign rules and other info.

Slow but sure progress on the WoW front since last time, the shaman is up to lvl 21. Here is a screenshot: 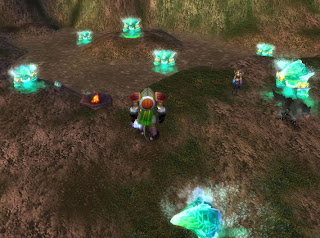 My Tauren shaman is there in the middle, surrounded by water elementals that he just freed during one of his quests. Also shown is Feawin's blood elf hunter and wolf pet.

I also have an idea. One of the more interesting opponents in WoW is the Murloc, intelligent fish-people that do not like the land-dwellers. They live along large bodies of water in small villages, like these: 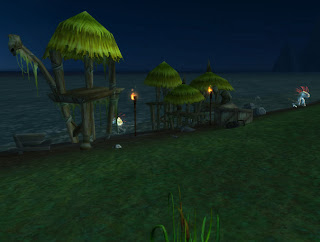 Here is a typical grouping of Murloc huts, with a couple of Murloc in the background. 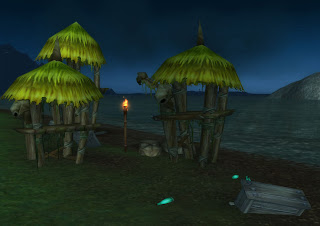 One more (this one is altered slightly, since these were taken during 'night' game-wise: 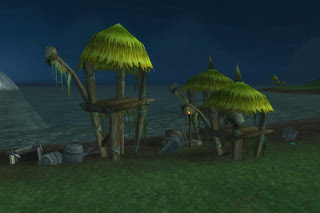 I think that these would make good scenery for my fantasy skirmish games. It should not be hard to scratchbuild some of these huts, and I have some boxes & crates in the bits box to use also.

The Outrider unit is finally assembled.

The musician was altered slightly. Originally, the musician is armed with either a pistol or a repeating pistol, but I wanted something different. There are plenty of repeater handguns on the kit's sprue that could be modified. 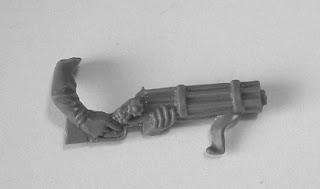 My plan is to lop off the right arm so the weapon will be held by the left arm, leaving the musician able to have his horn in his right.

With the mini being plastic, it was very easy to snip away the arm, and carve and file away the hand: 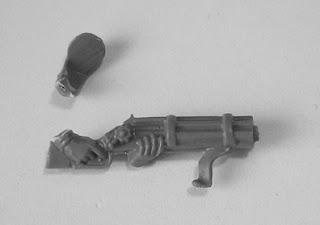 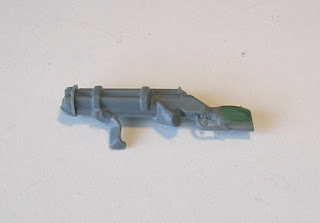 The only tricky part is to leave enough material to show the trigger. A very sharp knife helps. I also put a little putty on the stock to fill in some gaps.

Here is the fully-assembled musician: 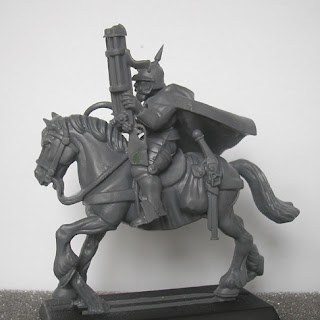 The unit leader underwent a similar conversion. His original weapon was a grenade launcher, a weapon that is good for heavily-armored targets but once again I wanted something a bit different ( and a higher quantity of shots). 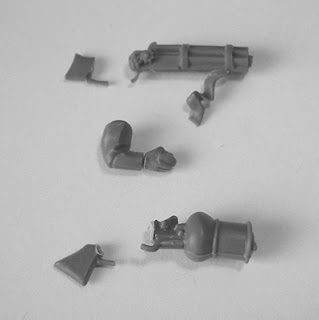 The trigger guard broke on each weapon - not too surprising since it is thin. The butt of the repeater handgun's stock was trimmed to allow the hand to fit within and to get the trigger guard back together. Also, I rotated the wrist. Test-fitting of the new weapon showed that it would not fit alongside the horse's neck. I scored the wrist along the cuff but I did not cut it completely through. A part of the wrist was left intact, and I twisted the wrist gently to get it into the proper angle, then filled in the gap with glue. This was a bit of an experiment, as I would usually just cut if off completely and then drill and pin the wrist back to the forearm. Hopefully, the joint will be strong enough.

This is the finished weapon: 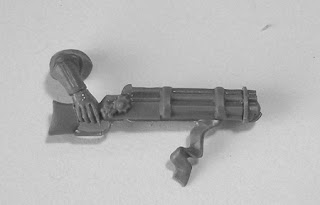 And, the fully-assembled leader: 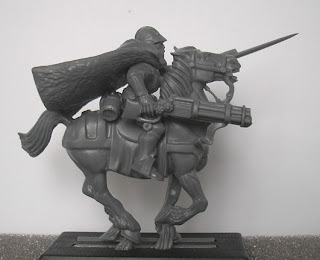 In retrospect, I can see that the pose of the arm is a bit awkward; I hope that nobody else notices!

Here is the entire unit, together: 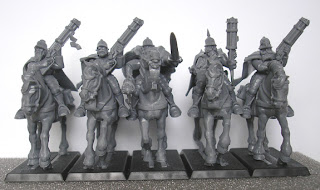 The horses are leaning a bit, but it does rank up together nicely, and should be a good-looking unit once painted.

Today is the day for Drumbeat, a small miniature gaming get-together run under the auspices of NHMGS. We (Feawin and I) were looking forward to attending, but she is ill and my stepdaughter just had surgery, so those plans are shelved. Next year, perhaps.

(Yes, this is one of those year-end reviews and new year's previews... bear with me!)

I'm always planning things, and 2007 was no exception. Lots of projects planned, but little accomplished.

40K - The Tau are back into the box, and I do not think that I will keep them past July. They just are not interesting to paint or game. 40K is most likely to go on stand-by as other projects take the stage, but those Orks are tempting. Back in 1987 I had Orks, and now they might be back. It will be a low-key project; I envision that most of the vehicles will be scratchbuilt, and the boyz will be had with a minimum of monetary expenditure.

Warhammer - A marvelous turn of events here. I had originally planned to make this as a proxy sidelight to the Renaissance project, with enough overlap to do fantasy battles. But with the arrival of so many Empire minis (thanks again, kids) this has taken a life of its own. I still need a lot of infantry for the army I want, however I have been given a great start.

Warlord - This set is being replaced with a new, simpler game - Song of Blades and Heroes from Ganesha Games. It is a very generic system, with small amounts of troops on the board, making for fast games.

Renaissance - I still have great hopes for this project, but it might take a back seat, at least for the first half of 2008, to the project listed next. Still want to do this in 28mm.

Tekumel - The vast majority of hobby money I spent in 2007 went into this project. Minis and books galore came in, but I do want more. Unfortunately, I wasted a lot of time 'thinking' instead of 'doing', and it shows. I am still not yet satisfied with a potential rules set, but the C&C:Ancients conversion looks good.

And, one last idea - I want to have a historical game set so I can actually have something to run at local conventions. This will likely be a naval game, with either 1/1200 scale post-ACW ironclads or 1/3000 pre-dreadnoughts. Just something inexpensive to purchase and quick to prepare. I will let you know...