For the mass battles of the Half Continent, I am going to use 15mm miniatures. A decision on specific minis to use is still in the future, but I have thought a bit on the general classes that I would like to see on the table, and the general minis that should be suitable.

Line units - These are your regulars, trained for their part in the line of battle. In MBT, there are several names for these troops: fusileers, musketeers, haubardiers. But the differences between these are not visible at 15mm sizes, so the minis are virtually interchangeable. My choice for these units will be early 18th century musketeers, from the Great Northern War (GNW) or the War of Spanish Succession (WSS) (or both!). These minis typically wear a long platoon coat, with no turnbacks, largish cuffs, and a tricorn.

Assault units - There are units of heavily armored foot troops known as troubardiers. They do not carry muskets; instead they are equipped with metal armor, bascinets, and heavy two-handed weapons like halberds. I am not certain, but some type of War of the Roses halberdiers would work.

Light units - Skirmishers, in loose formations. In MBT, these are called ambuscadiers. If they are available, I would like to use riflemen from either a French & Indian War (FIW) or a American War of Independence (AWI) range.

Artillery - WSS or GNW artillery and crews should be usable. Limbers would be drawn by oxen, or maybe even mules for very light pieces. Horses are not a common sight beyond the confines of a major city as the monsters find them to be very tasty. From what little description there is of a major battle in the MBT series, I think that there are no battalion guns; artillery are organized into batteries more akin to Napoleonics.

Cavalry - Despite the fact that horses are a favorite snack of the nickers, there are a few mounted units in the Half Continent, called equiteers. Once again, WSS units should fit the bill.

Mercenaries - Mercenary units are fairly common in the Half Continent due to the Imperial limitations on the sizes of armies. The best of these sellswords are called lesquins. Known for their flamboyant hats and clothing, the best minis to represent them would be Landsknechts, preferably late 16th-century. There are also lesser quality merc units called foedermen. As they are not so well dressed, I think that late 15th or early 16th century Italian or even Swiss minis would fit. Although there is no direct mention of them, I would expect that there are a few, very few, mounted lesquin units. For these, I would use English Civil War or Thirty Years War cuirassiers.


Well, that is quite a selection, but where to begin? I would think that some line troops and artillery would be the best. Now, to find suitable mini manufacturers...
Posted by El Grego at 11:25 7 comments:

The first tangible piece of the skirmish collection has arrived. Some time ago, the fine folks at Mantic Games - a new miniatures producer - gave word of a free give-away of some of their then brand-new plastic Ghouls. Now, I am not the type of hobbyist to turn down 'free minis' so I jumped through the hoops required to get in the queue, and waited patiently...

And here they are: 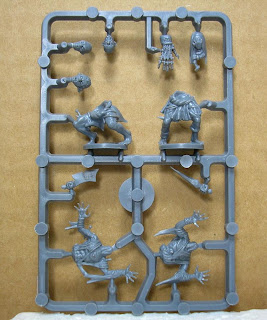 Still on the sprue! These are some very nice plastic figures. They are of the 28mm size, but it is hard to determine exactly how tall the minis will be in their unassembled state; hopefully when they are assembled I will remember to take a pic of them with a measuring device in the background.

These will make fine revermen for skirmish gaming! (Revermen, or gudgeons, are creatures that are an assemblage of 'parts' taken from other creatures and re-animated by the black arts.) They do have more clothing than the typical reverman might have but that is not a problem. The extra parts on the sprue - the cleaver, knife, and other accessories are not suitable, but will be saved for other minis.
Posted by El Grego at 20:16 No comments:

After quite a bit of deliberating, I have come to the conclusion that the mass battle system will not be based on a fantasy ruleset. In fact, the concept of having mass fantasy battles is being eclipsed by a desire for 'Imagi-nations' style table-top conflicts. It will not be hard to organize these alt-history battles, as the nations of the Half-Continent are organized and equipped very much like their historical, 18th century counterparts. I would just need a simple way to throw in the oddities like scourges, lahzars, and even the odd nicker or gudgeon.

A set of historical rules is needed. I intend to start by looking at the Free Wargames web site...
Posted by El Grego at 15:09 2 comments:

Legion of Ever Present Glory, part 8

Slowly the First Legion takes form. I have started work on some archers, and the last of the spear-armed troops are nearing completion. I have decided not to convert the rest of the spearmen into swordsmen, with the exception of the one figure in the back row on the right.

Now this force just needs a priest or three and it will be all set.