Once again, I seem to be falling for the siren's song of a micro-armour project, and even a more general 6mm revival.  Long ago, I had WW2 and modern micro-armour, along with some 5mm H&R ACW miniatures mounted for Johnny Reb.  I am finding myself looking back with fondness for those projects, although it is tinted with some of the frustrations I am finding with the larger scales.

One issue is of course the much larger space needed for mass battles with 28mm.  Pricing is notable but not so much as the projects will just be lengthened out until they are funded and finished.  Patience is something I have gained over the years!  And, maybe it is just my need to do something different, at least as compared with the local/regional gamers (28mm is big here).  Working my projects into 6mm would take some creativity and ingenuity, as the miniatures are not found on the store shelf.

So, perhaps I should set aside the mass battles projects for 6mm, leave 28mm as skirmishes, and throw in some tanks in 1/285 to garnish it off...

The bad news part??  That would mean my yet-incomplete MAATAC stuff might need a paint-stripping session.  I do not really want to think about micro-armour in snow settings - the MAATAC stuff is large enough to stand out in white-based camos - and I would rather have some consistency in terrain packages to prevent too much repetition in purchases and painting.

Splashed a bit more paint on some tanks today: 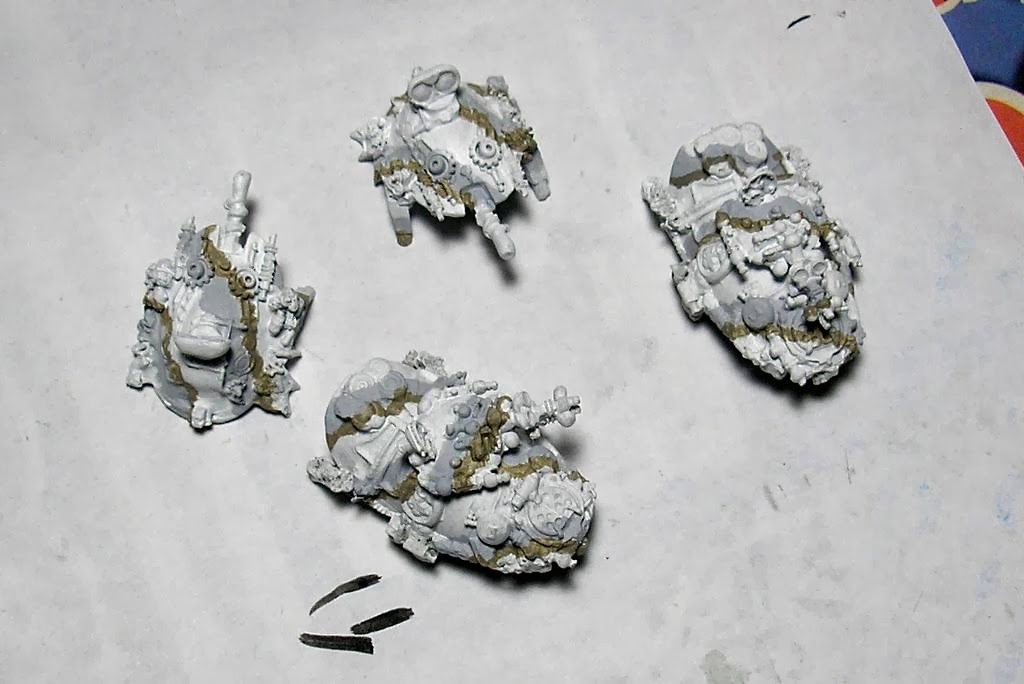 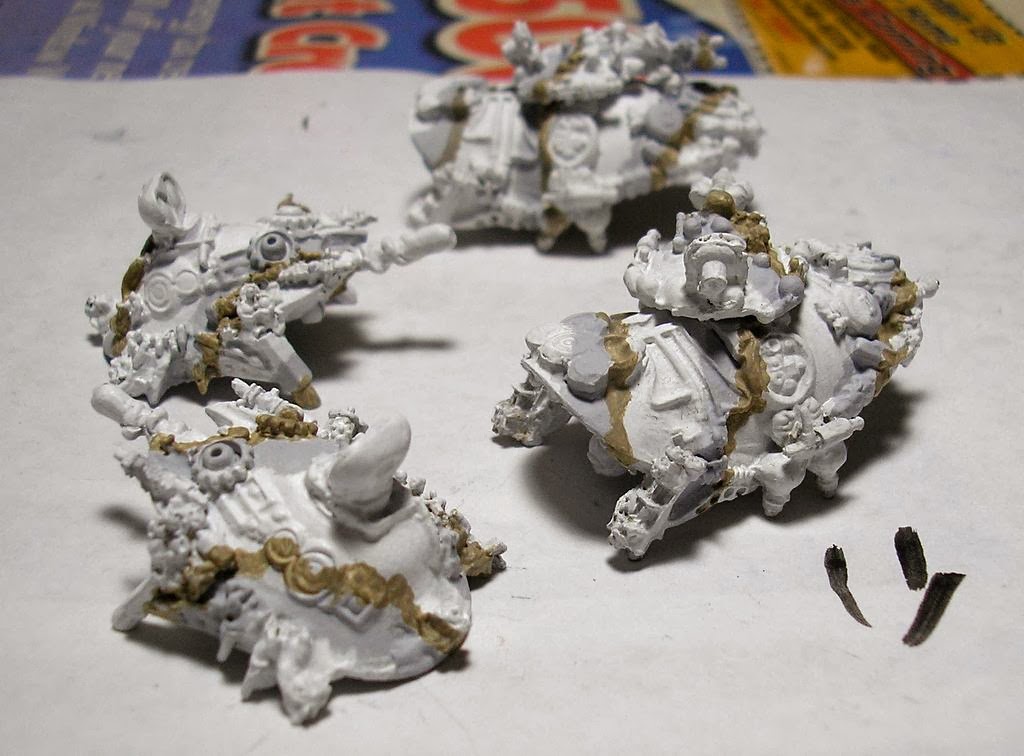 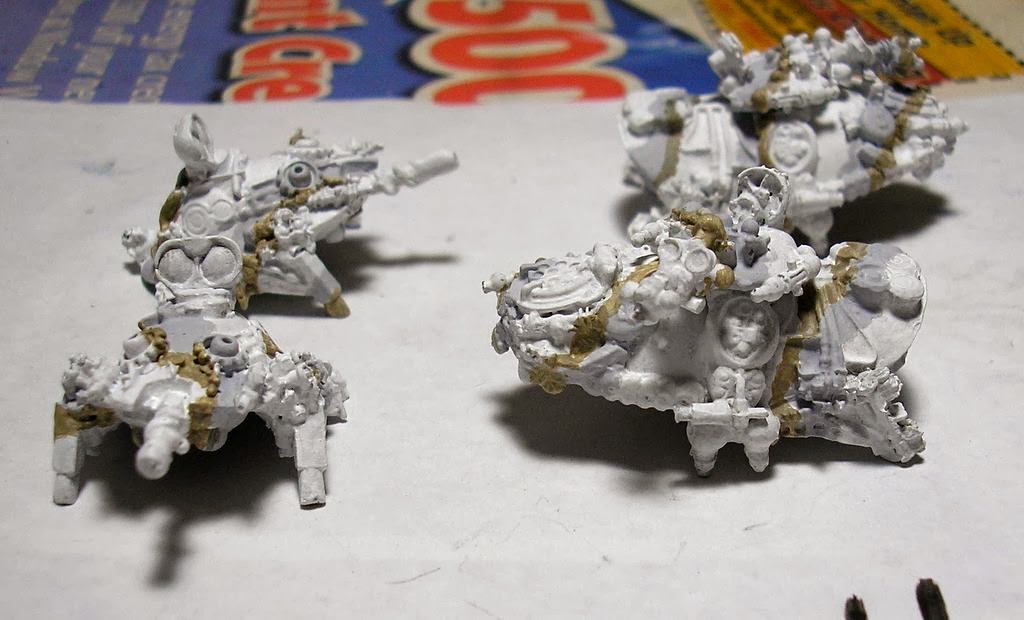 I recently became the proud owner of some new ship miniatures: 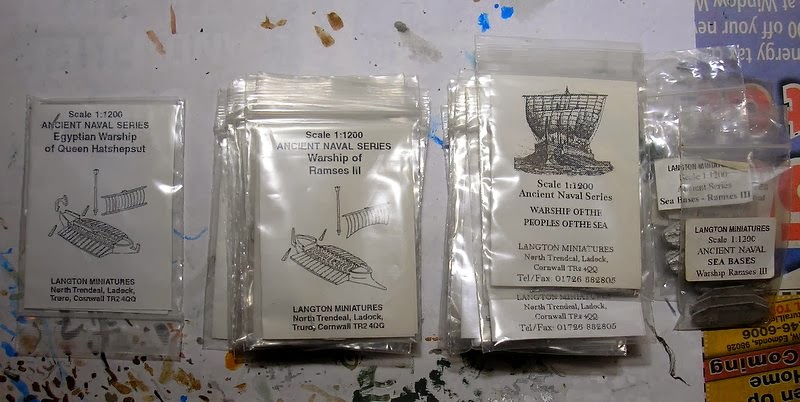 More Langton ships, all the way from Down Under courtesy of Ian (who has a fine blog at Thomo's Hole!)  The package included ten Bronze Age Egyptian and ten Sea Peoples ships along with bases.  Of course, what to do with them...  The first course will be to integrate them into my Tékumel fantasy naval project, where, due to their older appearance and small size, they will be representing minor powers (the Tsoléi Islands among others) or perhaps pirates.

And, here are some more detailed pics of the recent purchase: 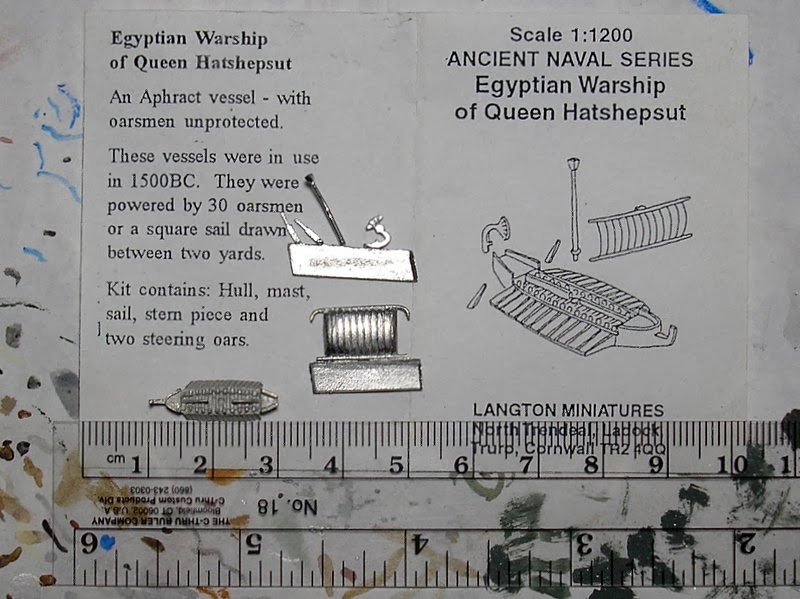 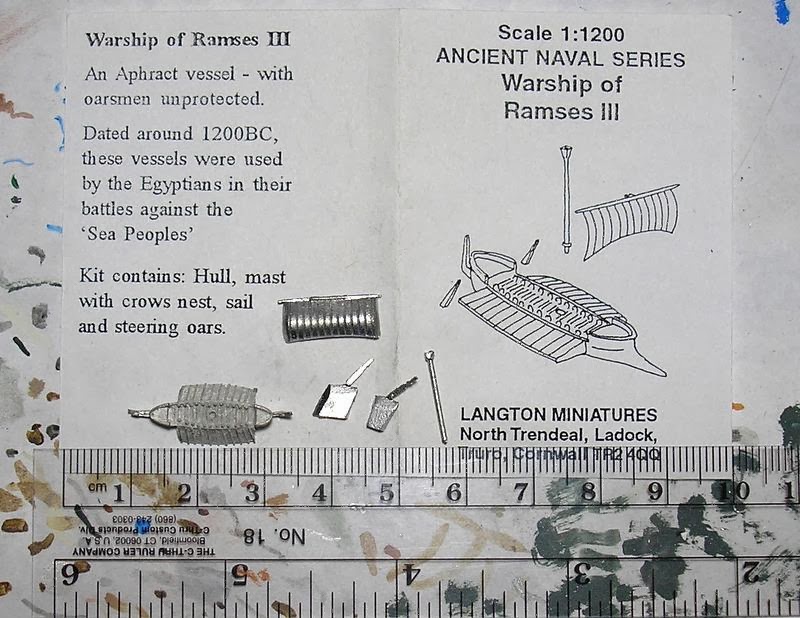 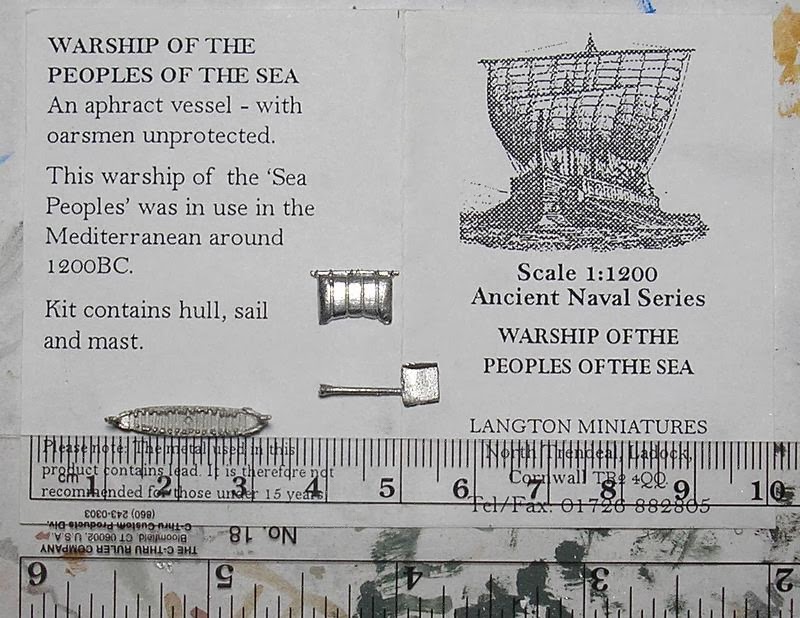 These miniatures are somewhat smaller than the triremes and such that I have featured earlier.  They might be small enough to be classed as srügánta or even séscha.  These will fit in well with the rest of the collection...

Speaking of the rest, I have been messing about with the Langton Deceres, which I have decided will be a Mu'ugalavyáni zírunel: 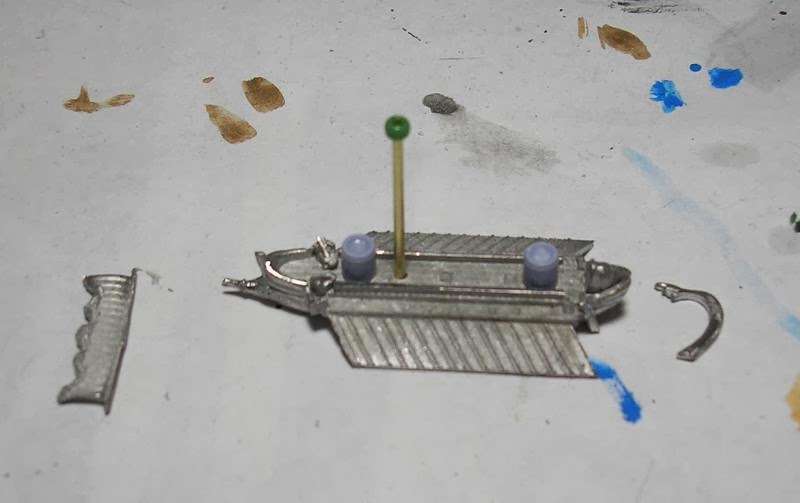 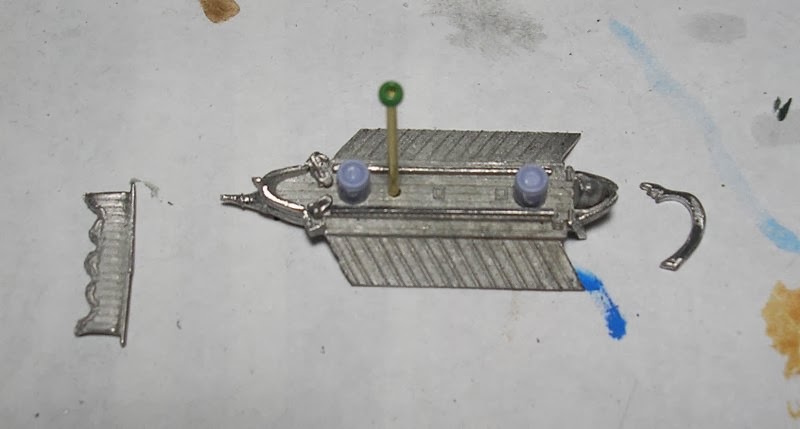 I have decided not to graft the goblin's head onto the prow of this vessel, which will grace the Tsolyáni version instead.  The big alteration here, and one that might be extended onto all Red Hat ships, is the replacement of the standard Langton towers, which are shaped more like a cube, with cylindrical alternatives.  The original mast, of white metal, has been replaced with a piece of brass wire with a small bead topping it for a crow's nest.

None of this is glued up yet.  I have yet to decide if this is suitable.  With the similarities of the designs of the miniatures, I am striving to have some differences in the fleets of the various empires beyond the painted finish.  But, are the towers a bit too much???

Instead of just bumbling along with my Tékumel miniatures, I thought that it might be worthwhile to set out a plan to get my collection onto an actual gaming table!  As this blog is part and parcel as an aide to get that done, here is some of the framework for the plan:

The choice of rules is being narrowed down.  I am looking at element-based rules that use no or few markers.  The field includes Fantasy Rules! by Chipco, DBA and/or HoTT by WRG, and Mayhem by Bombshell.  It will all depend on how much detail I want to include...

The scenario has been decided, although I wish it was quite that easy.  Way back in Dragon magazine #4, a Tékumel scenario was published called The Battle of the Temple of Chanis.  This scenario, in the original form, is between forces of Mu'ugalávya (the Red Hats) and Tsolyánu.  Unfortunately, there are no Mu'ugalavyáni miniatures in production, and most of the Tsolyáni legions present are not yet available, so adaptations will need to be made.  For instance, the Mu'ugalavyáni forces will be replaced by Baron Ald and the Yán Kór.  But, that is reasonably easy - the hard part will be acquiring and then painting the miniatures.

The miniatures will be coming, for the greater part, from The Tékumel Club.  I am hoping to use as few proxies as possible, but it might not be possible.

Terrain - the original Battle has a fair amount of forest, a river, the southern edge of a village, and the ruins of the Temple of Chanis.  I have not thought about this very much at this stage, but the terrain might stay very close of the original.

This is the rough plan.  This battle is fairly large, and I do not foresee being ready until 2015.  However, as I get parts and pieces ready, I can plan some smaller battles hopefully later this year.

Let's start off the new year with a pic of the painting table: 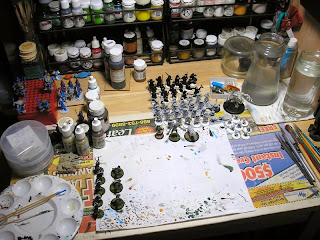 A very familiar place - Tékumel stuff - including naval in the plastic containers - on the left, along with a pair of MAATAC vehicles that need to be stripped of their paint; Half-Continent in the center.

Now that the home network is once again operating, I can post some pics.  Here are the first five musketeers for my Boschenberg force: 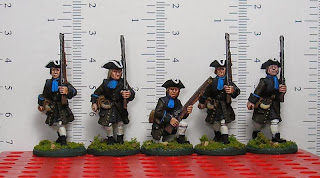 The chap on the right is the first one painted, from some time ago; now he has four companions - a half-quarto I suppose.  The brown of the coat does not show up very well with my camera, but the blue sure does. 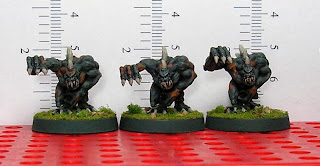 I am not particularly happy with the pose of these miniatures, but they should work well for gaming.


And a group pic: 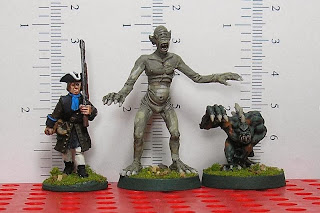