Well, here is the usual chaos on my table at the moment:

The now-commonplace assortment of genres and scales - fantasy, sci-fi, and historical - 6mm through 28mm.  The pile of 'stuff' in the center is yet more vehicles and now infantry with their bases for BattleTech.

I continue to be amazed by interest that both of my sons have in BattleTech.  My original thought, when I bought the introductory box set last year, was that I would need to collect all factions for the game, paint them, and cajole my sons to play.  Boy howdy was I wrong, and we are in the process of collecting and painting more mechs, and now 3rd party vehicles and infantry, for the game.

Another popular game amongst my sons is Infinity.  This is a sci-fi skirmish game by Corvus Belli with some of the most finely sculpted and cast 28mm metal miniatures currently in production.  The troops in the middle of the pic above, both unprimed and in shades of red, are part of my collection.

Sci-fi is not the only genre getting attention here, however.  I am beginning to dust off some older historical projects, starting with some Medievals:

These units are for a 14th century Scots army:  Two units of schiltron on the left; and four Highlander units and their leader center and right.  They are not quite complete as their flags have yet to be purchased.  Somehow, these figures, and their unpainted counterparts, missed both the first and second sweep of 'disposals' last year, perhaps because I have a definite fondness for the project, which my lovely wife and I started way back when, and that a fair few were finished.

Here are the next two units, in a less finished state: 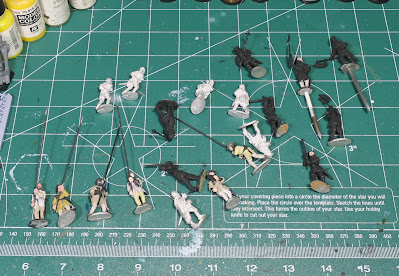 Two more schiltrons being sorted.  All of these figures are by Claymore Castings, now available through Antediluvian Miniatures.

Just as I thought some momentum had been achieved, I was struck down by that viral fiend Covid about three weeks ago.  A mild case, to be certain, but it has been enough to derail my hobby plans.

A little more about old projects, and maybe something new, will be due shortly!

Still not in the habit of blogging, and reading other blogs, but I am going to keep trying... 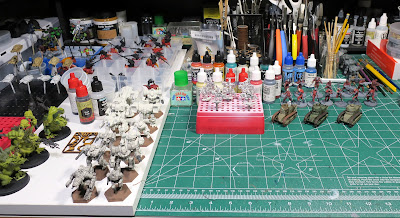 Many things on the table, from trolls and squigs, to different scales and eras of tanks, to sci-fi figures and mechs!  And, finally, another unit for the Greek project - Spartan cavalry.

As my painting and gaming mojo comes back, I have been thinking about other projects, of course!  Here are a few that are at the front of the queue at the moment: 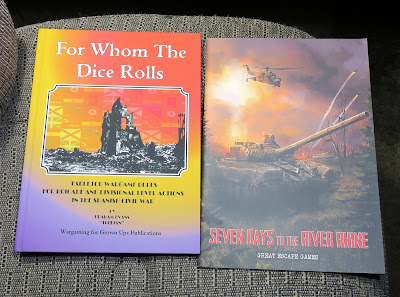 Seven Days to the River Rhine covers the Great Conflict that never was - the Cold War Gone Hot in Europe.  This era brings me back to my early days of miniatures battles, as the gaming group I was part of was writing/testing micro-armour rules for both WW2 and 'Modern'.  Decades later, it is back, with a slight twist.  The idea that I have is more akin to the movie Red Dawn instead of the book Red Storm Rising, just at a larger level of gaming.  This would not be a skirmish game.  1/285 miniatures have been acquired for this project, now known as G22.

For Whom The Dice Rolls also caught my eye when published.  Do I need another Spanish Civil War project?  That is the question, and since I have two in the works already - 20mm skirmish and 1/144 aerial - the answer seems to be, err, yes!  My original thought was to do this in 6mm, but I am thinking 10mm might be better, as the 1/144 aircraft could be used for the ground battles, and the 10mm kit can be targets/scenery for the air-to-air segment.  To my eye, 20mm would be too large for this set, but I could be wrong.  More thought is needed.

Just a brief note and request to my friends around the blogosphere - I am having issues with the 'My Blog List' gadget on Blogger, specifically I am unable to add or remove any listings.  Any solutions or hints?  The usual searches for answers from Blogger itself are not helpful.  I might need delete the gadget and rebuild the list.