Well, this month passed by very quickly! I did get a little bit more done with the projects:

1. Tau gue'vasa mostly assembled (having a bit of a problem with one trooper and his pulse rifle)
2. Primed a lot of Tau - drones, Crisis suits, Hammerhead
3. EQ2 - brigand to lvl 34, conjuror to lvl 29, templar to lvl 21
4. Did not forget about this blog!

Hmmmm, did I accomplish anything this month?

Not very good, but it is a start

OK, here is that promised series of photos from my famous victory over the Orks... 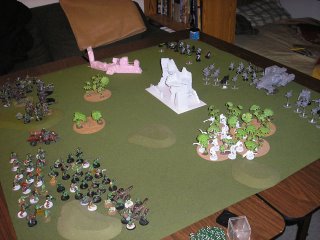 Orks on the left, Tau on the right. (please forgive the 'unfinished' look of our pieces!) Kroot, in the trees, facing shoota boyz, gretchin, and 2 Zzap guns. Directly behind the Kroot is the Tau HQ and the Hammerhead.

In the Tau center, a gundrone squadron and Gue'vasa (human helpers)

On the far side, the Orks have a trukk (with boyz), HQ, 2 killa kans, a dreadnought, and a mob of slugga boyz. Directly opposite them in the corner are Tau fire warriors.

The scenario - Seek and Destroy (from the 4th ed. 40K rulebook) 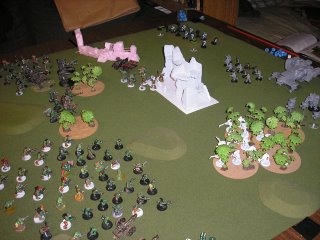 End of turn one - the horde moves forth, with only the Tau center moving forward in a desperate attempt to grab the ruins... the gundrones were wiped out by the trukk boyz. The Kroot are able to shoot most of the zzap gun crews down. 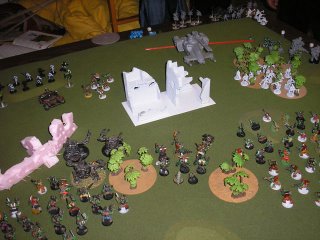 End of turn two - orks continue to move forward, Kroot, HQ, and Hammerhead shoot up the shoota boyz. The gue'vasa are defeated by the trukk boyz, who then try to visit the fire warriors. 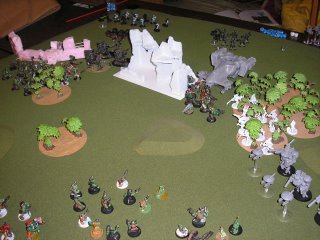 End of turn three - trukk and boyz gunned down by the fire warriors and the timely intervention of deep-striking Stealth suits. Ork HQ closes in on the Hammerhead, but is shot up by tank, kroot, and Tau HQ. The Hammerhead loses its rail gun in the exchange to ork melta bombs. 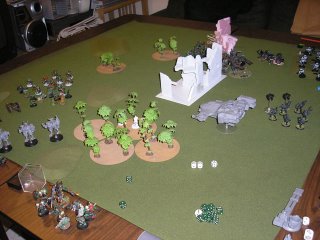 End of turn four - the ork HQ is destroyed by the Kroot in hand-to-hand, leaving three hounds as the sole survivors. The killa kans are neutralized by the fire warriors and stealth suits, with one being destroyed, the other being immobilized and the big shoota destroyed. The dreadnought and sluggas continue to advance... 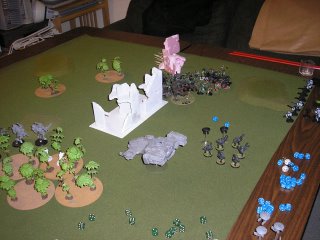 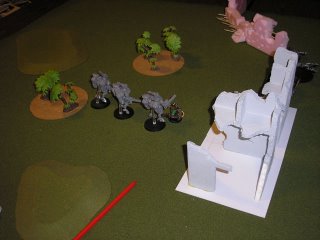 End of game - the last remaining burna of the slugga mob being hunted down by Crisis suits, the rest of the mob having been gunned down by the fire warriors and stealth suits.


This was another fun game. It doesn't really matter to me that I win or lose; I just like to push the pieces around. I think that I need to be more aggressive with the Hammerhead though. It usually sits on the battlefield like a giant pillbox.

Last week-end was a quite productive one. Briefly, on Saturday I finally defeated No.2 son at a Warhammer 40K battle. He used his Orks against my fledgling Tau force, and was narrowly defeated. I took some pics during the game and I shall attempt to post them here with a narrative of the action.

Then, on Sunday, I played some EQ2, the first time for almost three weeks. And some good timing it was too! Some other guildies (including one of Nomad Elf's characters) were on the trail of one of EQ2's special Halloween quests. This one involved some heavy combat (for our levels) with the mighty Pumpkin King. This is a 2-group raid mob, for our levels at least (I run a level 26 conjuror as my main). The four of us waited around for a long time until finally grouping with 8 others to try the King. With a full raid group, the Pumpkin King went down fairly easily, although Nomad Elf's druid went down as soon as the King spawned... I guess he doesn't like elves. The best part was the loot. I will find links to the items, but one was a +8 INT ring, and I received a +10 INT headpiece after a guildie won it by lotto after the fight. He was nice enough to just give it to me (his character is a Berserker). All in all, a great EQ2 night!
Posted by El Grego at 21:47 No comments:

I am working on a couple of projects at the moment. In an effort to actually complete one (hopefully more), I am following Nomad Elf's lovely advice and only working on three at a time. Normally I would just buy, buy, buy minis and then figure out what to do. However, that just is not working. The budget and time constraints make it difficult to do more than that.

The first project is a Tau army for Warhammer 40K. I have been following GW games since 1987, but I had never become seriously involved (for some this project is not a 'serious' 40K project!). The catalyst is of course the interest my sons have in 40K. I am only working on approximately 1500 pts of Tau, which is not a large force but is perfect for me.

Project 2 is a Reptus force for Warlord from Reaper. Warlord is a skirmish-scale fantasy game, and Reaper is producing an entire line of miniatures to support it. So far, I have only 10 minis for my Reptus force.

Number 3 is the ever-present naval project. At the moment, I am approaching my naval collection is a different way. Instead of buying bunches of minis (see a pattern here), I want to purchase only those minis needed for a specific battle. I see naval gaming now as more of a break from painting figures instead of my main collecting focus.

Once I get my digital camera straight I'll post some work-in-progress shots...
Posted by El Grego at 20:43 No comments:

How about some pics? 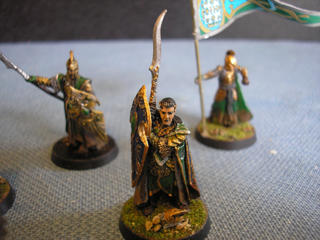 Gilgalad from GW's Lord of the Rings game.

Most recently, I have been trying to get back on to the hobby's horse, so to speak. I had not done much with miniatures for a long time. Oh sure, I read magazines, and web sites, went to an occasional convention, and visited local stores, but I had not painted or hosted games for quite a while, even with the blooming interest of my kids into miniatures.

(I have three sons, all of them play miniatures games, but only No. 2 son is a painter. All of them like Warhammer 40K)

So, despite a shrinking budget and a contender for my hobby-time rising, I will get back into minis!


The contender for my hobby-time? Everquest! When I met the nomad Elf three years ago, I really did not know anything about it. She, however, was fully involved in the original EQ, and, as our relationship progressed, so did my involvement with EQ. I did really like EQ, and now we play EQ2. I'm still not as good in EQ2 as she is, probably never will be, but it is a fun and immersive environment.
Posted by El Grego at 20:57 No comments:

Well, we are up to about 10 years ago in this history lecture...

At that point, I had moved away from my hometown to the opposite end of the state. Not much for gaming at first, but eventually I met up with several groups. I met my good friend, lets call him "The Cap't", at this time. The Cap't is all about naval gaming. I had done some before the move, but we played a lot here. Wooden Ships & Iron Men started us off, and we also played many games of General Quarters. At one time we had a group of almost a dozen people playing a monthly naval game. Although we don't play as much together as we used to back then, The Cap't is still around!

I also met up with another group at about this time, NHMGS, or Northwest Historical Miniature Gaming Society. They have a web site here - http://www.nhmgs.org . It was through this group that I broadened my gaming horizons. Many different genres are played by NHMGS: ancients, medievals, renaissance, Napoleonics, ACW, etc.
Posted by El Grego at 06:39 No comments:

I'll start this off with a brief synopsis of my gaming history. I started off with Avalon Hill boardgames, oh lets just say a long time ago. Unfortunately, this was mostly solo gaming, since none of my friends were interested. D&D entered my life during high school, and provided a lot of fun times, but the game fell out of favor after I moved away from my hometown for the last part of my college career. Started off with miniatures while interested in D&D, since one of the groups I was playing RPG's with were also mini fans. They played micro-armor, and I was hooked. I bought and painted mostly 'modern' micro-armor, Soviets especially. Sadly, these are all gone now; I can't even remember what I did with them! Pretty much gave up gaming from the time after college ended until the time my marriage ended. I was still interested in gaming, but it was mostly evident only in the magazines I read - The Courier and Historical Gamer. These mags just solidified my interest in miniatures, even though I could not participate.

Welcome to this, the first post of many for our blog!

We (my girlfriend and I) are going to be sharing our mutual love of gaming with the rest of the blogosphere. I am the miniatures gamer, and she is the MMORPG'er, but we play both genres together. Hopefully we will post not only our thoughts, but also photos and screenshots of our games.