Well, when it rains it pours sometimes!  One more set of new miniatures have arrived: 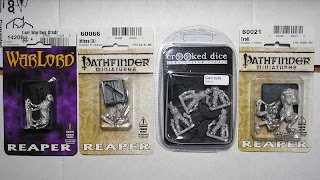 Starting from the left is a Reaper War Dog, which will be pressed into service as a proxy for a tykehound or guard dog.  Second from the left is a trio of Mites, also from Reaper, which seem to be a match for the Reaper gremlins I have already purchased, and will also be used as grinnlings.  This will make a total of 11 grinnlings!

Second from the right is a set from Crooked Dice - Corn Dolls, commonly known around these parts as scarecrows.  On the Half Continent, these are called jackstraws, and are a particularly vicious kind of revenant (or undead construct).  Jackstraws are mentioned in the third book of the series, Factotum.  These miniatures will get some modifications, including some with tricorns.

The right-most miniature is a Reaper Troll, and I think it is a great proxy for a large monster.  The miniature is reasonably similar to the 'Swarty Hobnag', which is also mentioned in Factotum.


I will have more pics of these later, after the League of Augsburg miniatures are primed at least!
Posted by El Grego at 20:00 No comments:

Once again, I find myself wondering how so much time has gone by since the last post.  Of course, not working on the plan makes it difficult to produce content!

However, the gears and cogs are slowly turning again.  Housecleaning has turned up some old almost forgotten books, and a recent purchase is going to add to the stack as soon as it arrives (hopefully tomorrow).  I will post pics soon, most likely on the week-end.

Two more issues need to be sorted - theatre of operations and rules.  I would like to work on both a WW2 segment and a sci-fi segment for the project, using the same basic terrain lay-out.  A long time ago, I told myself that if I ever got back into 6mm it would be in a setting that would be completely different from the settings I was using for larger size projects.  This advice is being ignored and I am leaning towards a desert setting at the moment.
Posted by El Grego at 07:35 No comments:

I think a break from baskets and nickers is in order, so how about this: 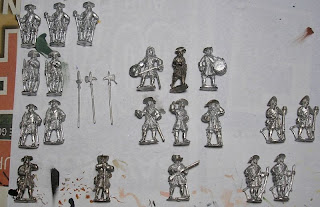 This is the better part of my first order of Warfare/League of Augsburg miniatures!  (Technically, I purchased them from Le Roi Soleil Miniatures, the US distributor).

Shown above is pack 'B008 At ease, no pike.'  There is a great variety of poses in the pack which is something that I really enjoy.  14 musketeers and 6 command make up the pack for a total of 20 miniatures, plus the separate weapons as shown.  No flagstaffs but I prefer it that way personally.

Also included in my order was this: 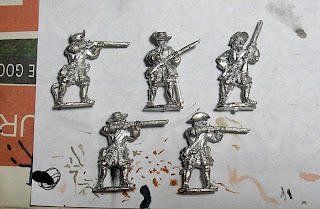 This is pack 'WLOA01 Musketeer firing line'.  The three firing miniatures are all slightly different, in weapon pose and hat variations.

It is my intention to use these miniatures as the first of my lesquin units.  Lesquins are the mercenaries of the Half Continent, known for flamboyant dress and high fees!  Compared to the Ebor WSS troops, they are not so flamboyant, but they are different enough for a start.


And, a comparison pic: 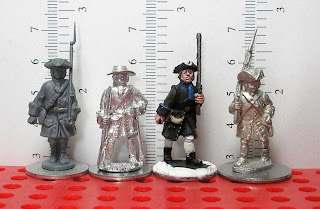 From the left - Wargames Factory, Warfare/LoA, Ebor, Imperialist
The LoA miniatures do have a very thin base, but they match up with the Ebor miniatures very well I think, in stature and style.  The Wargames Factory figures are somewhat taller, while the Imperialist miniature (specifically a Palatinate musketeer) is shorter - Imperialist does bill this as a 25mm miniatures, whereas the others are 28mm.
Posted by El Grego at 19:34 No comments: