In my last order from The Tékumel Club, I purchased a handful of these: 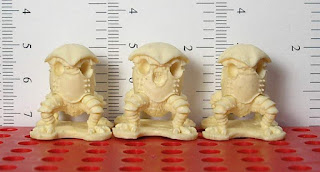 Armored Ahoggyá!  Short, squat, ill-tempered and ill-mannered, they are among the toughest troops on Tékumel.  Four arms, four legs, and four sets of eyes are among the more obvious features on these creatures; just one mouth fortunately.

Also included in the order:

These are an unarmored variant.  Hopefully the detail is visible; I have not had any time to paint or even assemble these miniatures. 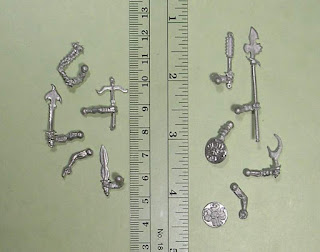 This is the selection of arms and armaments that come with the Ahoggyá.

A new blog focusing on Tékumel has just started  -

Over the week-end I dabbed some paint onto one of my 28mm miniatures as a test of a Boschenberg uniform scheme: 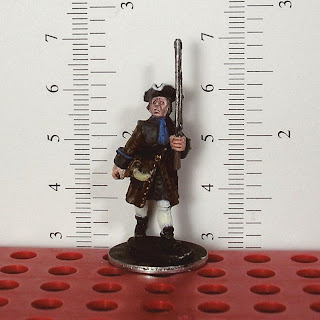 My camera did not respond well to the color scheme - this pic has spent some time with my lovely wife and GIMP!  It is hard to see the difference between the brown and the black, although in person it is obvious.  The original artwork is at the official MBT page here.

I also took a bit of 'artistic license' with the trim and neckpiece colors, and I am not particularly happy with the skin color scheme, but for me it is a lot of progress!

As I put together my first small battalion of miniatures, I forgot to get the standard bearers ready.  Here they are now: 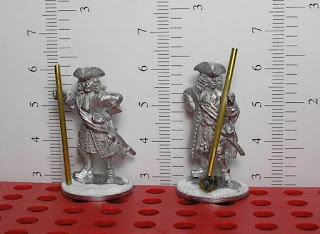 I added a length of brass tube for the flagstaff.  The actual spandarion will be mounted on a separate piece of tubing.  Hopefully this will aid in the storage of the unit after it is complete.

It is hard to see in the pic, but the chap on the right is resting his flagstaff on a 'rock' just to add some visual interest...
Posted by El Grego at 09:24 1 comment: 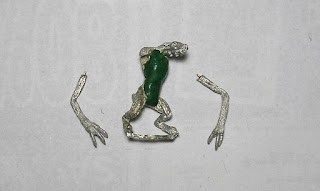 I have clipped and puttied the basket, prior to adding a layer of fur.  The arms have also been drilled out and pins added.

I intend to let the green stuff cure for quite a spell before trying to sculpt the new coat of fur.
Posted by El Grego at 12:52 2 comments:

Finally, after too much time has gone by, I have settled down to have a look at a miniature that could be used for a monster, or nicker, for some Half Continent gaming. 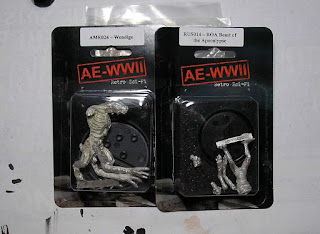 I am going to start off with the figure on the left, Darkson Designs Wendigo for their weird WW2 game.

(The fellow on the right makes a pretty good gudgeon in my opinion though, and I will return to that at a later point) 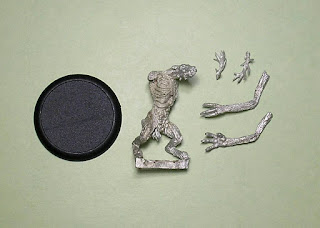 The beasty is going to take some work, however.  This Wendigo is sculpted as an undead being.  It is my intention to skin over the open bits with some green stuff to give it a slightly more lively appearance.  I might reduce the forearm length also, as they seem a touch too long, especially in this pic.  The base, that accompanied the miniature, is 50mm in diameter, but I might try to replace it if I have a 40mm round base available. 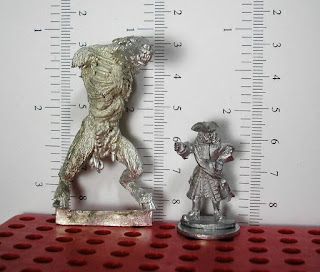 Here is a comparison with an Ebor Miniatures ensign.  Big beasty is an apt term I think!
Posted by El Grego at 12:38 3 comments: In an attempt to start the new year off on a good note, here is a pic of my desk as it is currently.

Let's hope that more work will be done there this time!